Ballots to vote to accept or reject USA Gymnastics’ plan of reorganization must be submitted by November 29, 2021. Click for More Information 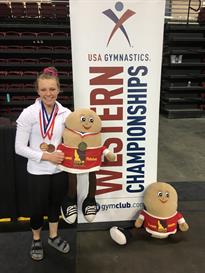 Sophie is an incredible young lady and an inspiration to everyone in our gym. She has overcome a very difficult situation and has turned into a champion! During the 2015 season Sophie was a level 9 superstar winning the AA at Pink Ribbon and Nadia Comaneci International Invitational and a vault State Title. However, during April of the same year, something terrible happened. Sophie was in a car accident that resulted in injuries to both of her arms. Sophie had to have surgery on both arms, one at the end of 2015 and another at the beginning of the next summer. She had to stay off of her hands for almost a year but that never stopped her from coming to the gym every single day and giving 100% effort in what she could do. Right after she was cleared from her second surgery Sophie came back mentally stronger than ever, working so hard that all of her efforts finally paid off when at the 2016 Westerns she became the Level 9 Westerns Vault Champion. We are all so proud! In addition to being resilient, Sophie is a wonderful teammate that always encourages others to do to their best. She is very dedicated to her sport and has very high expectations for herself in and out of the gym. Sophie maintains a 4.0 GPA in her junior year of high school and continues to work hard towards her ultimate goal of being a collegiate athlete. Everyone at JAG is very proud of her! Keep it up Sophie, you are extraordinary!